Synchronise the brightness of your built-in display to all your external monitors.

In setups where there's more than one Sync Source available, check this tutorial: Configuring Sync Mode for multi-source setups

If you have "Automatically adjust brightness" enabled in System Preferences, macOS will always adapt the internal display to the ambient light around you using its internal light sensor near the webcam.

Lunar can take advantage of that by continuously polling the MacBook display and sending every brightness change to the external monitors.

If the Polling Interval setting is set to 0 seconds then Lunar will use an internal macOS notification system to observe brightness changes instead of continuosly polling the display.

This greatly reduces CPU usage when there's no brightness change.

If the Polling Interval is 1 second or more, Lunar polls the internal display for brightness changes in the following way:

The x seconds interval is user configurable to any value greater or equal to 1 second. Lunar is not limited to syncing the brightness from the MacBook display. You can use any monitor as a source as long as it has a light sensor and supports Apple’s native brightness changing protocol.

Monitors that are known to match this criteria:

To use a monitor as a source, click on the Sync Target button on the display page to toggle it to Sync Source. Because Lunar is constantly listening for brightness changes, you may keep adjusting your source display using the brightness keys, TouchBar sliders or Control Center from the menu bar, and your external monitors will get those adjustments as well.

When Lunar detects a brightness change, it doesn't send the brightness value of the internal display as it is. Instead the value is passed through an algorithm that is constantly adapting to your manual adjustments so that the perceived luminosity stays the same across all monitors.

This is needed because some monitors can look brighter than others with the same brightness value. For example the MacBook display has 500 nits of brightness which is very bright compared to other monitors, so 50% brightness on MacBook’s display may look noticeably brighter than 50% on your external monitors (which usually have around 300-400 nits). In setups where more than one Sync Source is available, you might need to manually choose the best source.

Some examples of multi-source setups:

Here's how to configure Lunar for these setups:

Steps for keeping luminance in sync 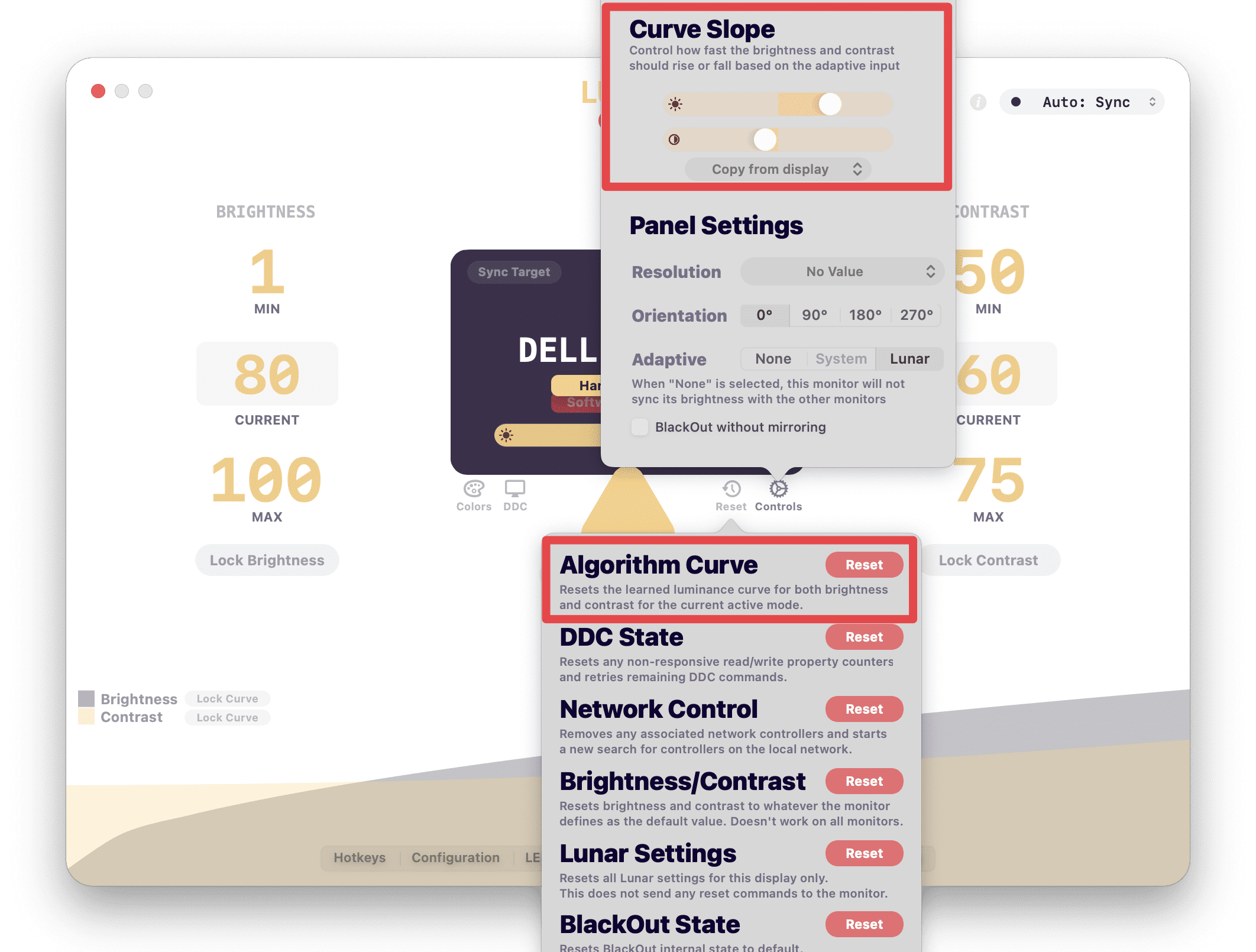 Adapt the brightness of your monitors based on the sun position in the sky.

If you use your monitors in a room with lots of natural light, Location Mode might be a good choice.

Lunar will ask for Location Services permissions when you first launch it, and will fetch your last coordinates to compute the sun position throughout the day.

If Location Services permissions are not granted or if there are no valid coordinates, Lunar will try an IP Geolocation service like ipstack.com

If both methods fail, Location Mode will be unavailable as a choice.

This is the algorithm that converts the sun position (in degrees relative to horizon) to a brightness value specific to each monitor.

Use an external Ambient Light Sensor to adapt your monitors.

The light sensors integrated in the MacBook and iMac are the best around. But in some cases, an integrated light sensor is not available. Some of these cases include:

Lunar can read the ambient light using an external sensor that can be either wireless or connected through USB.

The functioning principle is similar to Sync Mode: every 2 seconds the lux value of the ambient light is read from the sensor and passed through the Curve Algorithm to be computed into a fitting brightness for each monitor.

To read about how you can make your own ambient light sensor for Lunar, check this page: DIY Ambient Light Sensor

This is the algorithm that converts the ambient light (in lux) to a brightness value specific to each monitor.

Adapt your monitor brightness and contrast based on a pre-defined schedule.

If you use your monitors in a shared office, or if you usually work on a well defined schedule, Clock Mode can be a good choice.

Each schedule can be of the following types:

The previous schedule values are re-applied when following events happen:

Increase brightness over 100% on XDR displays.

The 2021 MacBook Pro and the Pro Display XDR feature an incredibly bright panel (1600 nits!), but which is locked by macOS to a third of its potential (500 nits).

HDR monitors that have brighter than normal LED panels can also support this feature.

If you have a supported display, simply press the Brightness Up key to increase the brightness over 100% and XDR Brightness will automatically get activated.

You can also click on the XDR toggle in the menu bar to activate it, and on the SDR toggle to deactivate the feature: 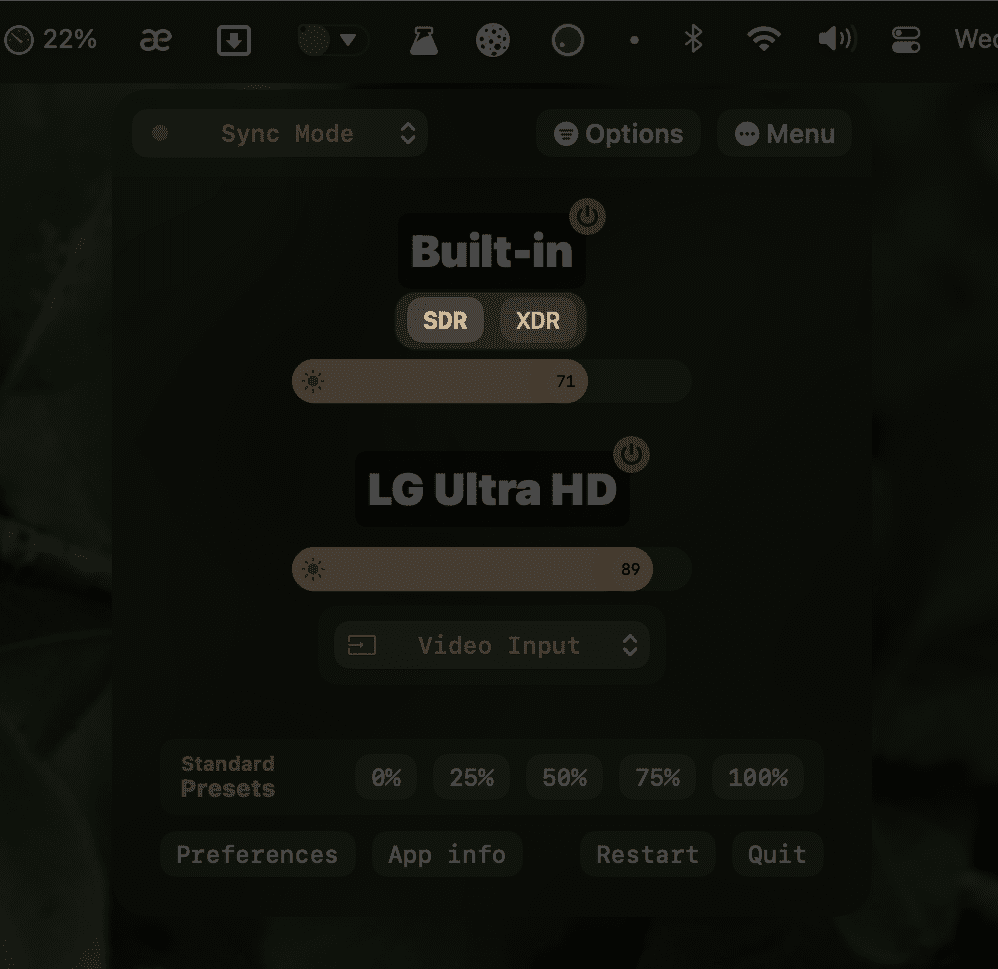 Lunar can automatically toggle XDR based on the ambient light around you.

This option is especially useful when switching often between working outside and inside on your MacBook Pro.

The feature is available only in the following conditions: 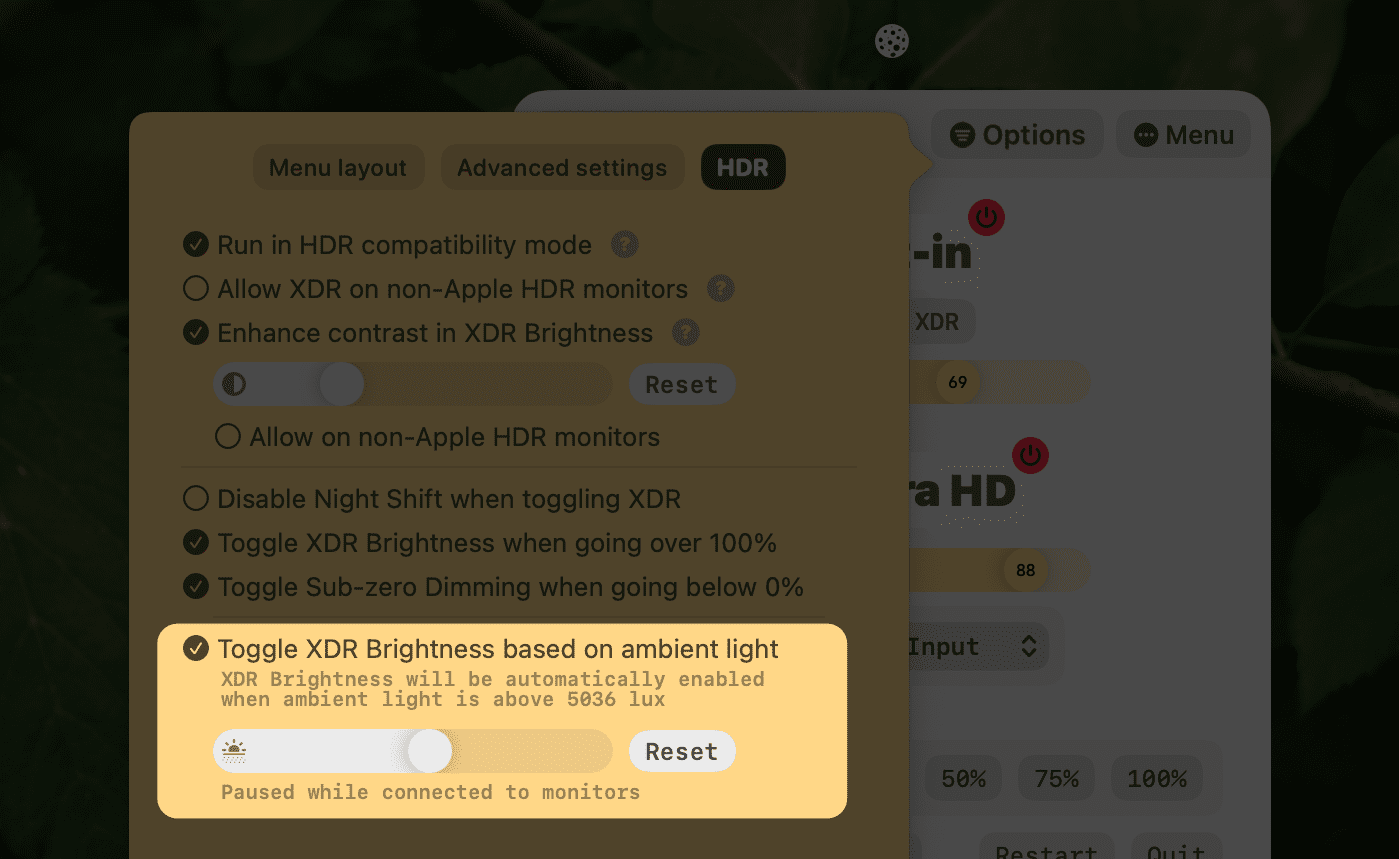 While XDR Brightness is active, Lunar can enhance the contrast of the MacBook Pro display even further.

This improves readability on darker backgrounds, so you can use XDR in the sun for longer periods of time.

Using XDR with white backgrounds will make the screen heat up much faster, and consume more battery than if used with dark backgrounds.

XDR brightness is mostly safe. The MacBook and Pro Display XDR have been designed to sustain higher than 500nits of brightness.

While sifting through macOS internals, I've discovered a lot of logic for temperature thresholds, local dimming zones to keep pixels at their most efficient brightness, and safe measures for high power usage.

Based on the current knowledge, I'd say this is pretty safe to use, given that the system will not allow you to go past unsafe limits.

Yes, the lifespan of the LEDs will be lowered if XDR Brightness is used daily, but no one can say by how much.

Heat degrades the junction between the semiconductors, causing less of the electrical current to be converted to light which will make LEDs dimmer over time.

How are LEDs affected by heat?

macOS will stop XDR when the heat passes a threshold, but if you find that the warning icon (⚠️) appears often in the menu bar you might want to use XDR less often.

Some HDR monitors have LED panels that support higher than normal brightness (usually higher than 600 nits).

Lunar has an option to enable XDR Brightness on these monitors, but which is disabled by default because not all monitors cope well with this.

To enable it, open the HDR tab inside the Options menu and toggle the Allow XDR on non-Apple HDR monitors checkbox. 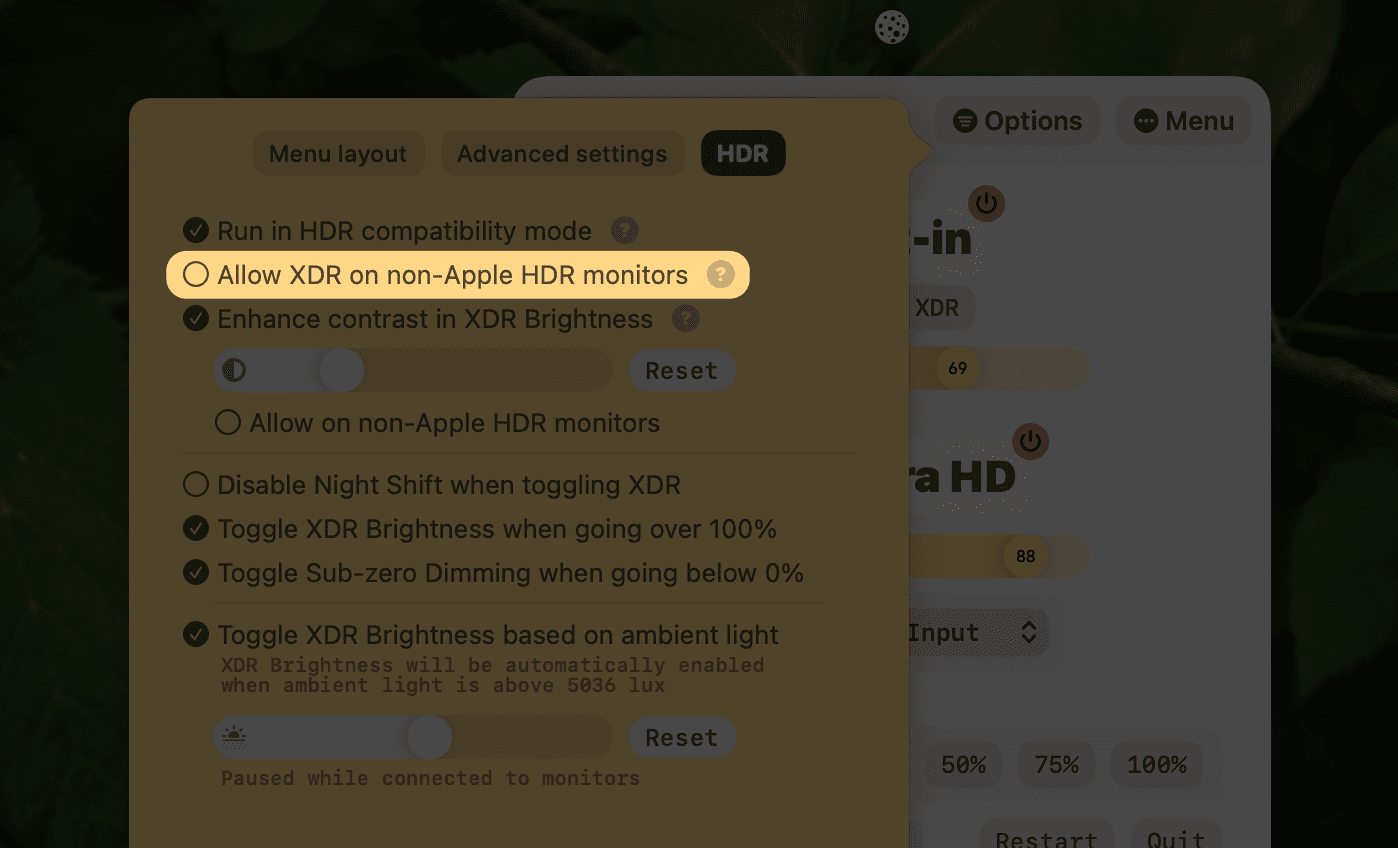 A list of monitors that might support this option can be found in the The Monitor Database under the xdr_displays view: 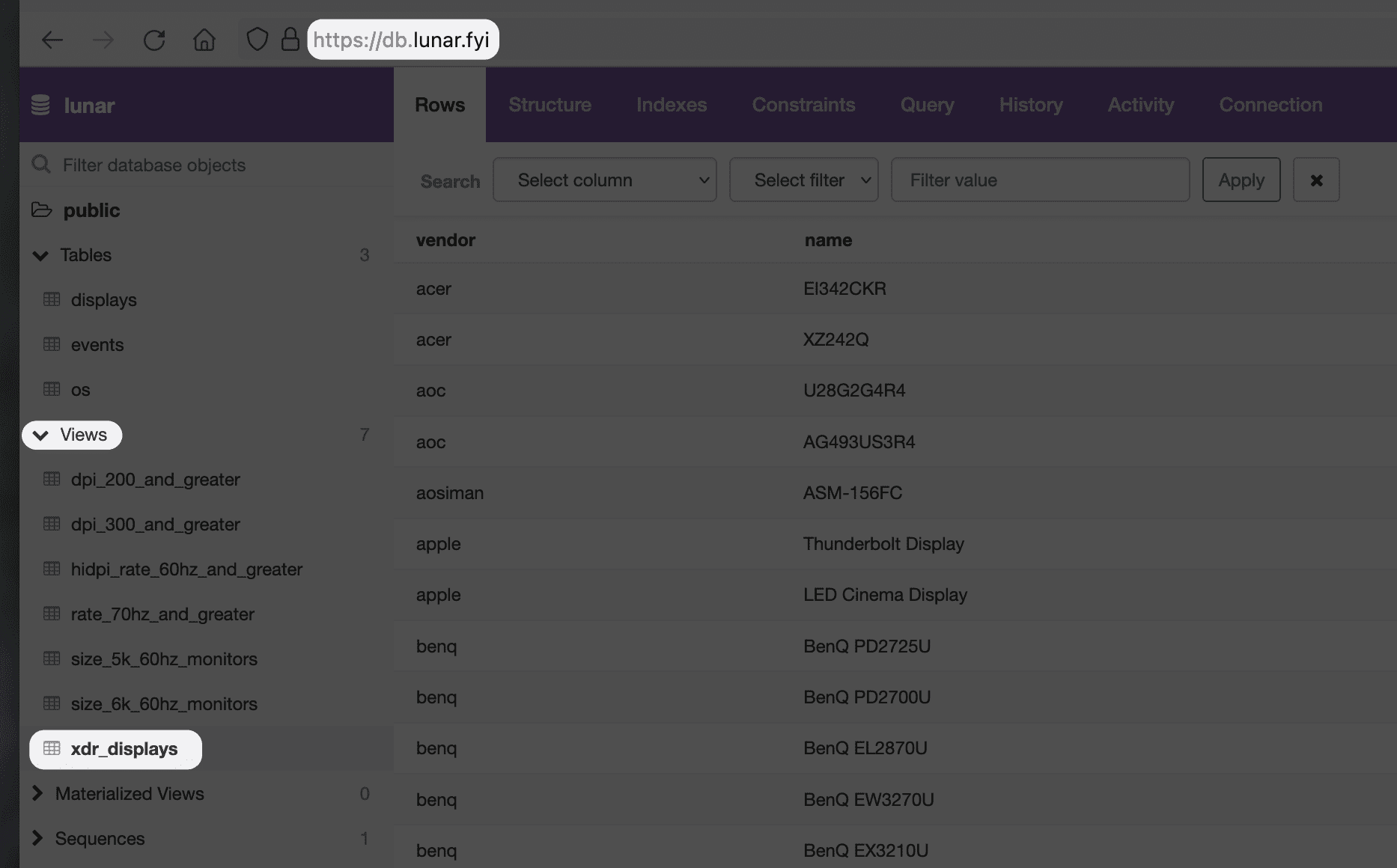 Light up your face in video calls.

FaceLight can turn your monitor into a really bright LED panel to light up your face when you're having video calls in a dark room.

The default hotkey for toggling FaceLight is Control+Command+5. You can also activate FaceLight from the Lunar menu.

Selectively turn off displays without disconnecting them.

The default hotkey for toggling BlackOut is Control+Command+6.

You can also activate BlackOut from the Lunar menu or by pressing the ⏻ Power button in the Preferences window.

Hold the following keys while clicking the button (or while pressing the hotkey) to change BlackOut behaviour:

The BlackOut hotkeys can be disabled from the Hotkeys page.

Caveats for DDC power off

The free version of Lunar allows you to control the monitor's brightness, contrast, volume and switch inputs, using either hotkeys, Media Keys, UI or through the command line integrations.

The only difference with Pro here is that brightness and contrast adjustments have a limit of 100 adjustments per day.

An adjustment is counted towards the limit only after you have finished fiddling with the brightness/contrast value.

For example, the following actions will only count as 1 single adjustment:

When you have done 100 adjustments in a day and the limit is reached, any new adjustment will show this dialog: The Pro license lifts this limit and you can do as many adjustments as you want.